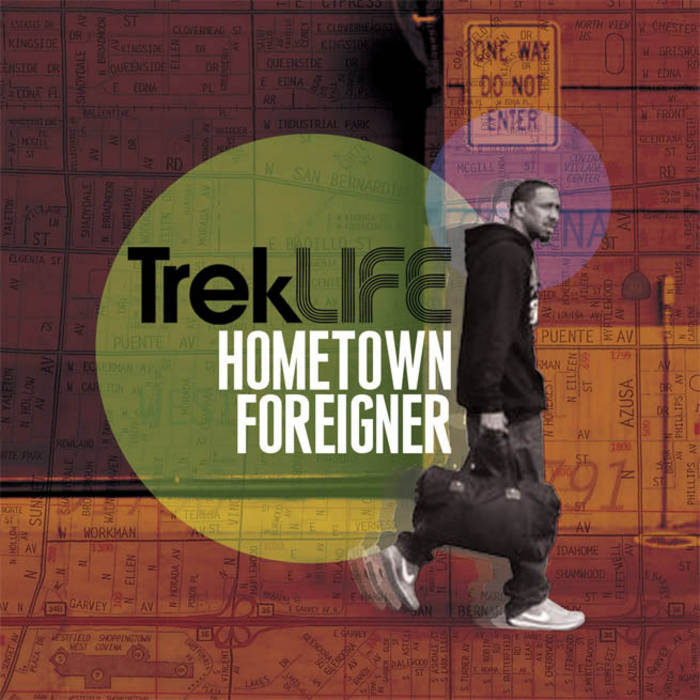 Hometown Foreigner represents the ideology of being "so close, yet so far" & the feeling of "not quite fitting in" though you're not a stranger. As a man and an artist my more recent experiences have been living slightly on the outside of things. We all have areas in our lives where we feel this way. That’s the Hometown Foreigner.”

Trek Life is one of the unsung heroes of California rap. He came up with Bishop Lamont, Evidence, DJ Babu, Blu and a bevy of other talented DJs, producers, and emcees (before anyone knew who they were). He's done entire projects with long time friend Oddisee. His music has taken him around the world more than a few times, even having toured with label mates Diamond District throughout Europe. Trek, always soft spoken about his accomplishments, wouldn't tell you all this himself but he even got in on the ground floor of licensing in Hip-Hop music - being the first mc to do work for a McDonalds' commercial, placing music in numerous shows on MTV, Showtime, and even Breaking Bad. Last year Trek Life got the invite to preform at Paid Dues - a highlight for any emcee, let alone a California native.

Trek Life third official album is titled "Hometown Foreigner." The new project is as unassuming as the veteran emcee's demeanor in real life, yet as worthy of praise as any album in the West. The project centers around Trek's place today as a man, being in the center of so much (California can do that) and yet feeling just outside - the hometown foreigner. The album's tracks are a fresh perspective on Hip-Hop themes including an examination of Hip-Hop values, the love of music, being a street casualty, and of course, living in the middle of it all and still being on the edge. Produced entirely by up and coming producer Duke Westlake, the record also features Oddisee, yU, Belvi, FunkLogik, DJ Buddy, Hawdwerk, GMK, Bishop Lamont, Hezekiah, Sean Wyze, and Richard Wright. Duke also mixed and mastered the album, showcasing just how talented he is in the realm of music.